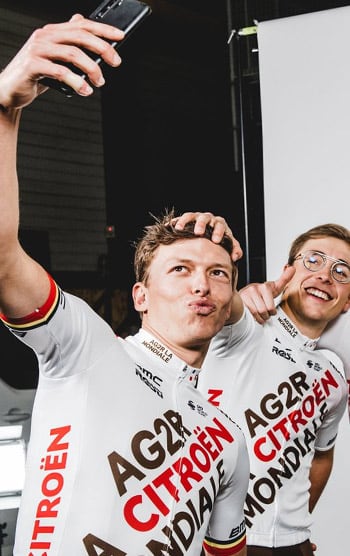 “Generate encounters”. For many, it’s become part of the vocabulary, a reassuring promise that sounds great but doesn’t guarantee much. That’s why L’Uzyne prefers to create synergies between brand and client, and sometimes even with advertisers.

That’s what happened in 2020, when AG2R La Mondiale was looking for a co-namer for its cycling team and met Citroën through the agency, while their rally partnership with Citroën racing was just about to end!

A few weeks (and hours of work!) later, the partnership was signed and both brands hit the road together for their first stage together: Le Tour de France.

On the schedule, setting up the team’s caravan, renamed AG2R CITROEN Team, a 360 activation around the Tour de France and, of course, leading numerous ground and digital operations, both for the public and partners.

A positive spirit reinforced by the success of the digital campaign that announced the partnership: a stunt in the middle of the city that transformed everyday cyclists into actual cyclists from the AG2R Citroën Team!

“An enticing 2021 season for the AG2R CITROËN Team”

The Tour de France was at the heart of this first year’s activations: 21 caravane stages, 40 Atelier vehicle animations, 50 theatrical concessions, 100 000 goodies given and a beautiful cover for our digital stunt! Tomorrow, the activations should see the light of day on all international cycling tracks (La Vuelta, Giro,…)

From French roads to the heart of concessions, the partnership between the two brands is writing a new history, one that is committed and sincere, for cycling and car lovers!

Basically, the wheels are in motion ;)

You made it this far? You must have burning questions! You’ve come to check out our website and our work hits the spot? You’ve discovered our engagements and some of our decisions hit the nail on the head? Do you just wanna find out if the Milka cow really exists? Get in touch with us—we’ve got the answer!

This site uses cookies — small text files that a site or its service provider transfers to your computer’s, or mobile device’s, hard drive through your Web browser. Generally speaking, cookies are here to store and remember user preferences and certain information such as carts, and to provide anonymised data to third parties such as Google Analytics. Generally speaking, cookies improve your browsing experience. However, you may want to disable cookies on this website and others. To do so, the most efficient way is to disable cookies on your browser. We suggest checking the website about cookies that offers guidance for all modern browsers.

By continuing to browse the site, you agree to our use of cookies to improve our website functionalities and analytics. Accept More info